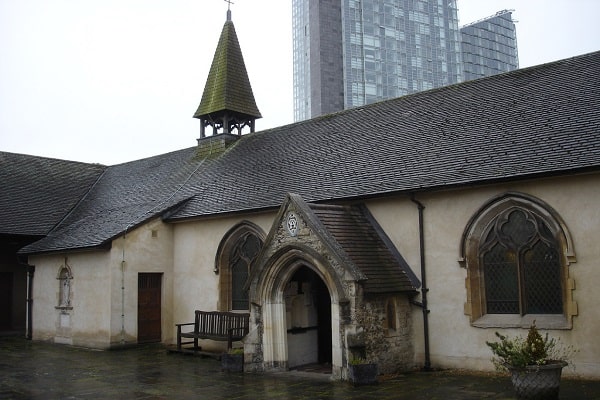 Known locally as The Hospital Chapel, this is one of the gems in Redbridge’s Crown – Graded II* by English Heritage, it is the oldest building in the London Borough of Redbridge, founded circa 1145AD by Adelicia (Adeliza), Abbess of Barking, as a hospice for 13 aged and infirm men.

Abbess Adelicia In those days Barking Abbey was a wealthy and influential nunnery, established in 666AD and endowed with the Manor Barking (including Ilford and Dagenham). The Chapel was dedicated first to St. Mary the Virgin. Later Mary Becket became Abbess in succession to Adelicia and she arranged for the name of her brother, Thomas à Becket, to be added to the dedication in his memory.

The complex consists of the Chapel itself plus almshouses on each side which were quarters for the poor brethren and the chaplains.

These have recently internally been converted into well-ordered modern flats.